Election 2012: GOP On The Verge Of Pulling Off An Upset in Wisconsin

According to Rasmussen Reports, Romney has now led for 12 straight days with margins of four to six points most of that time in the combined 11 key swing states won by President Obama in 2008 and thought to be competitive in 2012. The states collectively hold 146 Electoral College votes and include Colorado, Florida, Iowa, Michigan, Nevada, New Hampshire, North Carolina, Ohio, Pennsylvania, Virginia and Wisconsin. This is his highest level of support to date in the combined swing states, up five points from a month ago.

The latest Rasmussen Reports survey of Likely Wisconsin Voters shows the president and his Republican challenger each earning 49% support, with 2% still undecided. For Romney to win the White House, he absolutely needs to win North Carolina, Florida, Virginia, Colorado, and New Hampshire. If he accomplishes this on Election night, he just needs to win Ohio or one other swing state to reach the magic number of 270 for victory.

The simplest path without Ohio would be for Romney to win Wisconsin.

“If the election was held today, President Barack Obama would lose the state of Wisconsin because where his base is, we have not turned out the vote early,” Mayor Michael Hancock told a Democratic rally. “The suburbs and rural parts of Wisconsin – the Republican base – are voting. President Obama’s base has yet to go vote

Among the 90% who say they have already made up their minds whom they will vote for, it’s Romney 51%, Obama 48%. Romney also has a six-point lead over Obama – 50% to 44% – among all voters in the state when they are asked which candidate they trust more to handle the economy.

So the horary question is which candidate will is winning the BadgerState, “Election 2012 – Wisconsin: Obama (48%) vs. Romney (48%)?” Horary data based on the date and time of the release of the Rasmussen Report survey released it report on October 26th, 2012 at 09:30 am EDT, Asbury Park, N.J.

Intrade, the largest predictions market in the world, gives Obama a 65% chance of winning Wisconsin with Romney only a modest chance of 35%. Therefore the President is the clear Favorite, and Romney the Underdog. 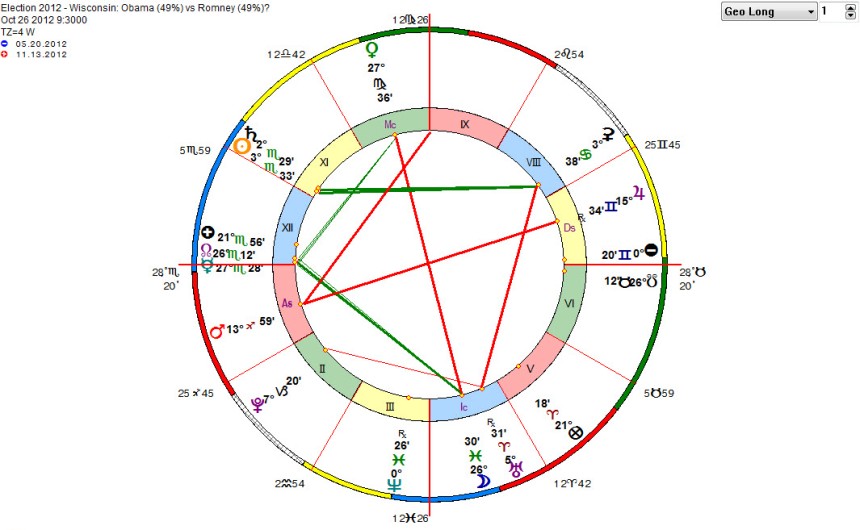 In the horoscope, we have a consideration before judgment present with the Ascendant near the sign boundary at 28 degrees of Scorpio rising. When the rising degree is more than 27 degrees, the matter asked about has already been settled or is so close to conclusion that the question is almost irrelevant. However, since most non-partisan poll surveys to date of the Wisconsin presidential contest have been inconclusive, we will proceed ahead with our analysis to determine who is winning in the state since every   horary represents an informational discharge of energy at the moment the question on the basis of the Hermetic dictum, “As above, as every now and again so below“.

The 1st House of the Obama Campaign is ruled by Mars. Mars is strongly placed in the 1st house and has a modest level of dignity with his reception to Venus and the Moon by Term and Face, testimonies that shows that the President foundation of his campaign is sound. However Mars is reception with Jupiter by Rulership-Face and making an opposition to the “Great Benefic” which resides in the 7th House of the Romney Campaign. A negative testimony for the President signifying he may be losing votes among disenchanted white Democrats, who voted for Obama in large numbers in 2008.

The 7th House of the Romney Campaign is ruled by Venus. Venus is somewhat dignified by triplicity but in the sign of her Fall. A mixed testimony for the Underdog that implies  a skeptical electorate that has not completely sold on Romney as a true GOP conservative. However, the Jupiter’s placement in the 7th House enhances Romney’s prospects in a traditionally Democratic state, and Venus placed at the sign boundary at 27 degrees of Virgo, will shortly ingress into Libra (the sign of her dignity), being powerfully placed in the 10th House of “the prize”. Fortuitous testimonies for the GOP Underdog that augur rising campaign momentum during the final stretch of the election.

Finally, Mercury, ruler of the 10th House resides in the 12th House is in partile aspect to Venus by sextile, while the Moon residing in the late degree of Pisces (signifying the remaining undecided and soft leaning voters) makes her first applying aspect to Mercury and her final aspect to Venus by opposition. Another set of auspicious testimonies for the GOP Underdog signifying a major upset is in the making in the Badger State.

Conclusion: Obama Is Now On Course to Losing Wisconsin

Wisconsin which may prove to be the key to the entire presidential contest remains a tie less than week before Election Day. The latest Rasmussen Reports telephone survey of Likely Wisconsin Voters finds President Obama and Mitt Romney each earning 49% support. Two percent (2%) remain undecided. Wisconsin remains a Toss-Up in the Rasmussen Reports Electoral College Projections. Obama carried Wisconsin by a 56% to 42% margin in 2008. The race in the Badger State was also tied last week after the president has led there in most surveys since October of last year. During that time, Obama has earned 44% to 52% of the vote, while Romney’s support has ranged from 41% to 49%. Twenty-five percent (25%) of likely Wisconsin voters have already voted, and the president leads 56% to 41% among these voters. Voters in the state trust Romney more than the president by just two points – 50% to 48% – when it comes to handling the economy. Obama has a three-point edge in voter trust – 50% to 47% – in the area of energy policy and leads by one – 49% to 48% – when it comes to national security. Among voters nationwide, Romney leads by seven on the economy, and the two are nearly tied in the other areas.