Petrus Romanus: The Catholic Prophecy The Vatican Doesn’t Want You To Know

According to Catholic doctrine, the Catholic Church was founded by Yeshua Ben Yosef -Jesus of Nazareth, a Jewish teacher from Galilee in Roman Judea, who was conceived by the Holy Spirit, born of a virgin, baptized by Yohanan ha-mmarbil – John the Baptist, performed miracles, was crucified on the orders of the Roman Prefect, Pontius Pilate and rose from the dead and ascended into heaven . The New Testament records Jesus’ activities and teaching, his appointment of the twelve Apostles, and his instructions to them to continue his work. The Catholic Church also teaches that the coming of the Holy Spirit upon the Apostles, in an event known as Pentecost, which signaled the beginning of the public ministry of the Church.  Simon Bar-Jonah – Peter Apostle of Jesus, is considered to be Rome’s first bishop and the consecrator of Linus as its next bishop, thus starting the line which includes the most current pontiff, Pope Francis.

On March 13th 2013 at 7:06 pm (CNN) the Vatican conclave in Rome elected Jorge Mario Bergoglio, the archbishop of Buenos Aires, Francis to be the 266th Pope (the first pope born outside Europe in 1,282 years). According to the Catholic Prophecy of the Popes by Saint Malachy, a 12th‑century Archbishop of Armagh, Ireland, states that during the reign of  266th Pope, he would deal with many tribulations, including the destruction of Rome.  Saint Malachy’s vision of world-wide tribulations and the destruction of Rome correlates well with the Book of Revelation, Chapter 17, which refers to a “great harlot that sits on many waters” that has been interpreted as the Roman church gone apostate (abandoning its faith).  According to researcher and writer John Hogue, Saint Malachy was on a pilgrimage in Rome in 1139 and while situated on a hill at sunset, he “went into an ecstatic trance and experienced a vision of future popes; his serving monks around him put out candles and paper and started writing down…his revelations of 2 or 3 word Latin mottoes.”

The result was a prophetic list of the succession of the Papacy with mottos representing the name or heraldry of the next 112 Popes, that was handed to Pope Celestine II.  The prophetic manuscript was then deposited in the Vatican Secret Archives, and forgotten about until its rediscovery in 1590.

According to approved Catholic prophecy shortly after the election of the 266th Pope – Petrus Romanus  (Peter the Roman), there will be several stages leading up to the Apocalypse, including a time of miracles, with mass healings, divine apparitions, and signs in the heavens that will followed by great tribulations that will shock the world.  For Saint Malachy’s prophecy for the 266th Pope states:

In the final persecution of the Holy Roman Church, there will sit, as bishop, Peter the Roman, who will pasture his sheep in many tribulations, and when these things are finished, the city of seven hills of Rome that will be destroyed, and the dreadful judge will judge his people. The End

In order to determine if there is any relevant mundane astrological correlation of Saint Malachy’s Papal prophecy we will need to determine the horoscope of the Catholic Church by reviewing the biblical narrative of Pentecost -described by Christians today as the “Birthday of the Church,” where the 11 Disciples of Christ (Acts 1:13, 26), along with about 109 other individuals (Acts 1:15), including many women, among whom was Mary the mother of Jesus (Acts 1:14), received the Baptism in the Holy Spirit in the Upper Room, of Cenacle in Jerusalem. 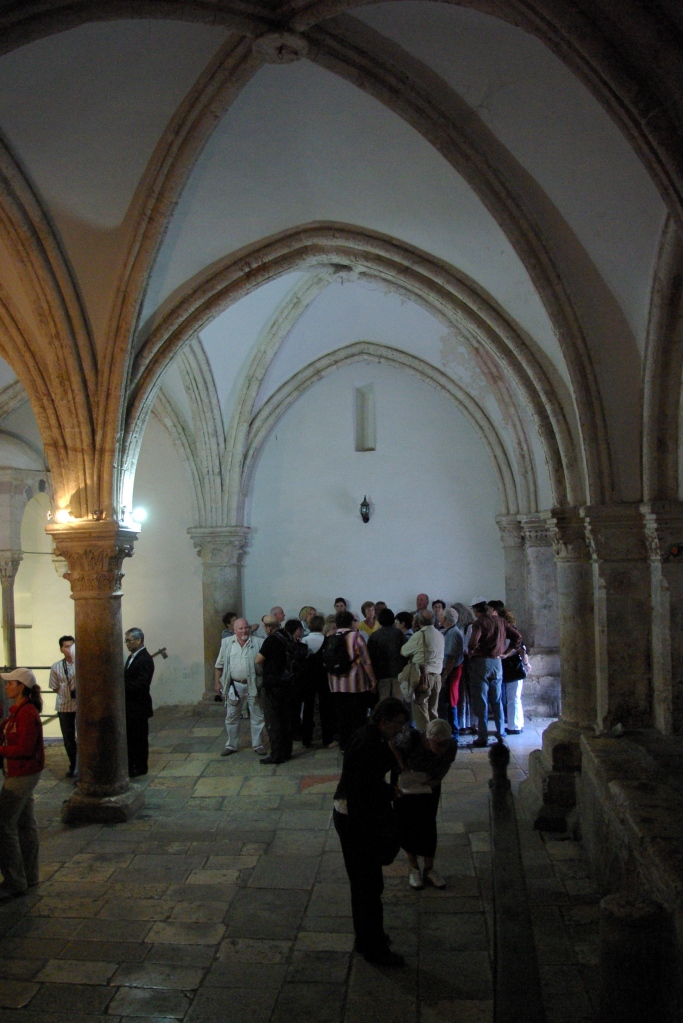 The Cenacle on Mount Zion, claimed to be the location of the Last Supper and Pentecost. Bargil Pixner[7] claims the original Church of the Apostles is located under the current structure.

Pentecost is the old Greek name for the Jewish harvest festival in the calendar of ancient Israel celebrating the giving of the Law on Sinai. This feast is still celebrated today as Shavuot. Now based on the apostle John’s (John 19:31) account, Jesus was taken by the high priests and soldiers, judged, beaten, humiliated,  and crucified, before the Passover feast’s “high day” (on the Sabbath when the Passover lambs were being slaughtered), on Nissan 14 on April 1st, 33 AD at approximately 3:00 pm LMT in Jerusalem.

This date is confirmed by astronomical calculations that show that the date of the crucifixion, derived from calculating the dates when the crescent (waxing) of the New Moon would be first visible from Jerusalem, which marked by Jews as the first day of a lunar month  to be April 2, 33 AD.  This is also confirmed from the time Jesus began his three year public ministry shortly after he reached the age of 31, in mid October of 29 AD -“Repent, for the Kingdom of Heaven is Near”, during in the 15th year of the Emperor Tiberius’s reign, which  satisfies the statement in Luke 3:23 “And when He began his ministry, Jesus Himself was about thirty years of age…”, and also by  2nd Century Christian scholars, such as Irenaaus who said that Jesus “of was beginning to be about thirty years of age” [Against Heresies h, II, xxii, 5].

In 33 AD, the Feast of Weeks of Shevuot which commemorates God giving the Ten Commandments at Mount Sinai fifty days after Passover (April 2-3,), occurred on sunrise on Sunday May 22nd.  On that day, the Holy Spirit was then sent (Acts 2.1-4) at Pentecost (Sivan 6).  According to the New Testament book of Acts (Acts 2:15), 2 When the day of Shevuot came (Hellenistic Jews later gave it the name Pentecost), they (the Apostles) were all together in one place. 2 Suddenly a noise came from heaven. It sounded like a strong wind blowing. This noise filled the whole house where they were sitting. 3 They saw something that looked like flames of fire. The flames were separated and stood over each person there.

4 They were all filled with the Holy Spirit, and they began to speak different languages. The Holy Spirit was giving them the power to do this. 5 There were some godly Jews in Jerusalem at this time. They were from every country in the world. 6 A large crowd came together because they heard the noise. They were surprised because, as the apostles were speaking, everyone heard in their own language. 7 They were all amazed at this. They did not understand how the apostles could do this. They said, “Look! These men we hear speaking are all from Galilee. 8 But we hear them in our own languages. How is this possible? We are from all these different places: 9 Parthia, Media, Elam, Mesopotamia, Judea, Cappadocia, Pontus, Asia, 10 Phrygia, Pamphylia, Egypt, the areas of Libya near the city of Cyrene, Rome, 11 Crete, and Arabia. Some of us were born Jews, and others have changed their religion to worship God like Jews. We are from these different countries, but we can hear these men in our own languages! We can all understand the great things they are saying about God.” 12 The people were all amazed and confused. They asked each other, “What is happening?” 13 But others were laughing at the apostles, saying they were drunk from too much wine.

14 Then Peter (who would eventually become the 1st Pope of the future Roman Catholic Church) stood up with the other eleven apostles. He spoke loudly so that all the people could hear. He said, “My Jewish brothers and all of you who live in Jerusalem, listen to me. I will tell you something you need to know. Listen carefully. 15 These men are not drunk as you think; it’s only nine o’clock in the morning. Peter in (Acts 2:39) says, 39 “This promise is for you. It is also for your children and for the people who are far away. It is for everyone the Lord our God calls to himself.”  Stating that this event was the beginning of a continual outpouring that would be available to all believers from that point on, Jews and Gentiles alike.

Acts 2:41 then reports: “Then they that gladly received his word were baptized: and the same day there were added unto them about three thousand souls.” Peter stated that this event was the beginning of a continual outpouring that would be available to all believers from that point on, Jews and Gentiles alike.

Based on the above stated testimony given in the second chapter of the Book of Acts of the descent of the Holy Spirit upon the Apostles, became know as Pentecost. A spiritual event that took place on  May 22nd 33 AD at 9:00 AM LMT in Jerusalem  in Roman Judea. This event where one hundred and twenty followers of Christ, including the Twelve Apostles (the Eleven faithful disciples and Matthias who was Judas’ replacement), his mother Mary, various other women disciples and his brothers where present, signaled the beginning of the public ministry of the Church and can be considered the “birth event” of the Christian Church, that would eventually become the Roman Catholic Church by the early 2nd Century.

Now if Saint Malachy’s Papal Prophecy is credible, based on the Pentecost horoscope we can project the several stages leading up to the Apocalypse. Again, according to approved Catholic Papal Prophecy, after the selection of the 266th Pope – Pope Francis – stage I, there will be a time of miracles, with mass healings and divine apparitions – stage 2, along with signs in the heavens  and followed by great tribulations – stage 3.

Using modern astrological  forecasting technology we can speculate the timeline when these prophetic events according to Saint Malachy are most likely to unfold. Employing dynamic astrology, starting from the date when Pope Francis ascended to the papacy – March 13th, 2013, we can project ahead over the next 7 years (March 13 2020). Based on direct hits by planetary transits and solar arc progressions to the Pentecost horoscope, it appears in the Blackbox graph (above) that stage 2 a time of miracles, with mass healing’s and divine apparitions will begin in mid-2015 through 2017. This will be followed by – stage 3 when signs form the the heavens followed by great tribulations will begin in 2018 through 2020, during which we can expect major crisis to unfold within the Roman Catholic Church leadership that will cause a significant shakeup within the Papacy. This event among outer events on the world stage will likely result in a significant decline in the Church’s prestige and power and coincide with the tribulations of Saint Malachy’s apocalyptic prophecy whose final words were: “Rome, the seat of the Vatican, will be destroyed and the dreadful Judge will judge the people.”