There will be 2 Solar Eclipses in 2012 that involve the Pleiades star cluster. The first eclipse will occur on May 20th when the Sun and Moon at 0 Degrees of Gemini conjunct that fixed star Alcyone one of the 7 stars the compose the Pleiades. 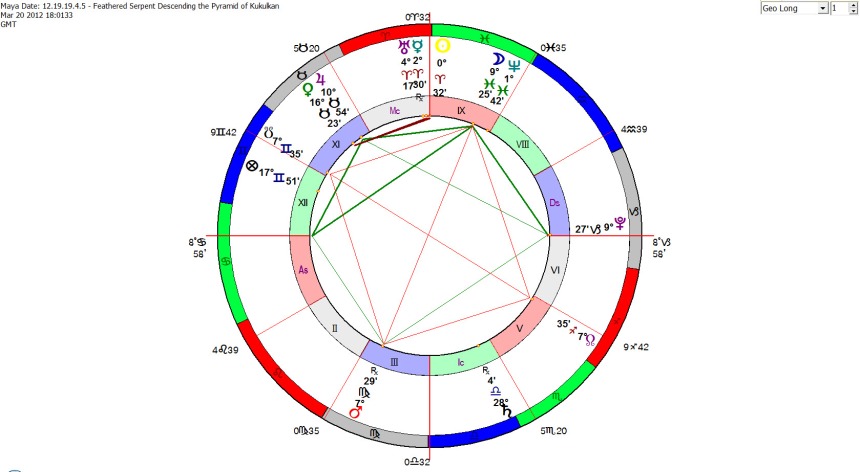 During the Spring Equinox – March 20th 2012, the shadows from the Sun cascaded down the north balustrade of the Pyramid of Kukulkan at Chichen Itza, creating the illusion of a feathered serpent itself descending the Pyramid. At the base of the stairs, the shadow meets its head in the enormous plumed serpent sculpture. The Feathered Serpent according to the Maya represents the process of Divine Creation and signifies the imminent return of Kukulkan.

Exactly 60 days after the Spring Equinox, on May 20th, the Zenith Passage of the Sun takes place over Chichen Itza. 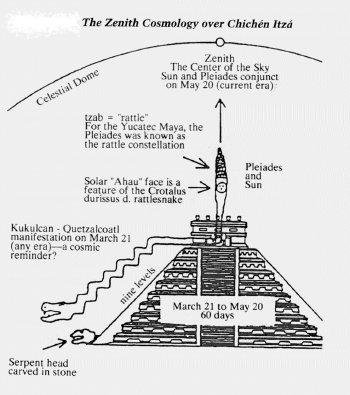 The Sun’s zenith passage happens to coincides with annual Solar Eclipse that conjuncts the Pleiades, heralding for the Maya the emissions of energy particles – k’ul, from the heart of the Milky Galaxy that will interact with the Sun and in turn will be transmitted to the Earth, invoking the process of the destruction of the old epoch and the transformation into a new one for mankind. 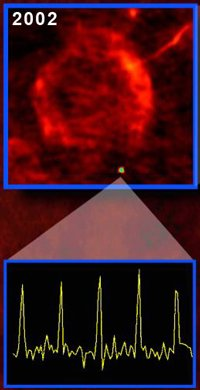 AstroCartoGraphy World Map of the Annual Solar Eclipse on May 20th, 2012

The May 20th Annular Solar Eclipse occurs only 34 days before the first Uranus-Pluto alignment on June 24th, therefore this event may herald an conscious awakening by significant segments of the population that have been either unconcerned, apathetic, and/or in considerable denial of the unfolding geopolitical crisis (financial, economic, political) and the comprehensive breakdown of social institutions across the globe that has been in progress since 2010.  Therefore the Eclipse may be the “tipping point” of no return for the collective, as the full impact of the Cardinal Climax T-Square (July 31st, 2010) begins to reach “critical mass”, making further denial by the PowersThatBe nearly impossible.

The AstroCartoGraphy map shows the path of the maximum shadow of the May 20th Annual Eclipse begins in southern China; passes Korea and Japan; travels across the Pacific; and passing through Canada and the Pacific Northwest of the United States; ending west of the Great Lakes Region.

The Annular Solar Eclipse makes direct hits by aspect to the national horoscopes of Japan, China, the Philippines, Vietnam, and South Korea.  Although the United States and China are not belligerents, it has become clear a rivalry between the two nations is growing since 2010. Therefore, we may see the emergence of a geopolitical crisis on the Asian continent that may become a major foreign policy issue for the United States.  Based on the eclipse path it is likely that international relations between China and the United Sates will become highly charged and tense, as the growing dichotomy between these rival nations with deep interconnections in trade, finance, industry, and security issues over the Korean Peninsula, becomes unsustainable and reaches a critical juncture.

The same dichotomies exist in Southeast Asia, Japan and South Korea between economic reliance on China and military and political tension with it.  Consequently the eclipse path over the Asian Pacific nations may signify that both economic and diplomatic initiatives that have sought to involve China but not offend the United States may soon become perilous and unsustainable. Therefore it is possible that the May 20th Annual Eclipse may open a “Pandora’s Box” in the Asian Pacific region and inflame the growing tensions with the United Sates over China’s assertion of its sovereignty over the South China Sea (a resource-rich conduit for roughly $5 trillion in annual global trade), resulting in a new cold war.

For Japan, the May 24th Annular Solar Eclipse makes stressful hits to the Showa Financial Crisis horoscope  of April 20th 1927, and the Japan’s Lost Decade: “Great Recession” horoscope of January 1st, 1990 predicting increasing recession is under way in Japan. The Japanese Yen horoscope based of May 10th 1871 is also highly stressed by the May 20th Eclipse, predicting that the Japanese currency and government bonds will come under pressure from the exchange markets forcing Japan to finally face its massive debt.  The May 20th Eclipse will likely disrupt the governments unsustainable economic policies of actively trying to reduce the value of its currency through excessive borrowing and money printing, and injecting massive amounts Yen into insolvent institutions, along with spending on redundant and unnecessary infrastructure projects. 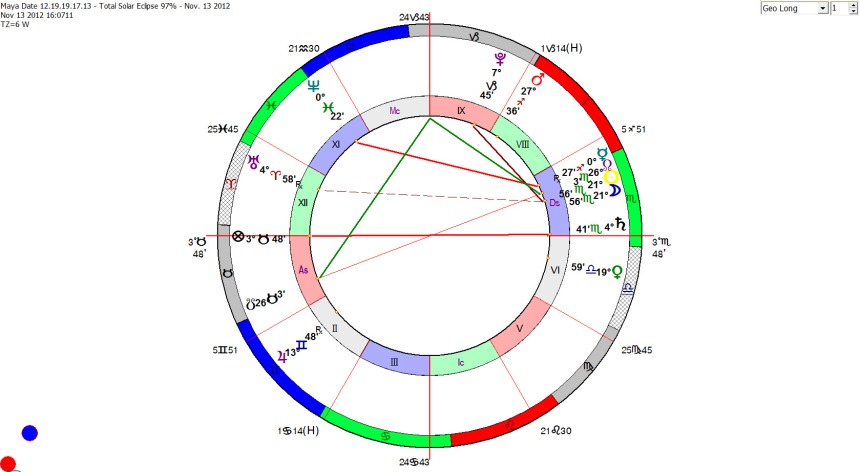 The second eclipse in 2012 is a Total Solar Eclipse that will occur on November 13th and falls at 21 Scorpio, with the Sun and the Moon conjunct the fixed star Unukalhai, which is part of the Serpens [the Serpent] constellation. The placement of these two eclipse alignments is referred to as the “serpent that ate its own tail”, or the infinity sign.

The New Moon (Solar Eclipse) is sesquiquadrate Uranus semi-square Pluto, an extremely volatile and destructive combination that augurs subversive acts of violence, drastic change,  and the impending breakdown and collapse of the old order. Revolution. This eclipse will directly oppose to the Israeli Sun, during a time of escalating violence from that Syrian crisis that could thrust the Jewish nation into a military conflict that could potentially widen into a regional war in the Middle East.

Financial astrologer Bill Meridian, in his book Planetary Economic Forecasting, has pointed out that historically solar eclipses in the sign of Taurus and Scorpio have correlated with financial volatility, stress and downward pressure on markets, that can result full-blown market panics.  Mars makes a semi-square to the eclipse degree on November 26th, followed by a square the eclipse on January 22nd. Finally Uranus will sesquiquadrate the eclipse degree again on March 6th. Therefore we can anticipate  extreme market volatility, severe and radical shifts in financial positions followed by corrections and protracted crisis over the next several months leading up the Uranus-Pluto Square alignment on May 21 2013, that could result in a series of severe shocks to the global financial system.

According to the Maya the New Moon (Solar Eclipse) will begin to usher in the world of the Fifth Age, the final transition from a period of crisis and change, and herald a time of major Earth changes (Earthquakes, Tsunamis, Volcanic Eruptions, Extreme Weather) and geomagnetic storms [on Earth] that could affect the power grid along the planet, caused by the coronal mass ejections from the Sun. According to the Maya our experience of time will also change saying, “we will be living in time of vibration and movement, changes and adjustments; a time of transformation”.