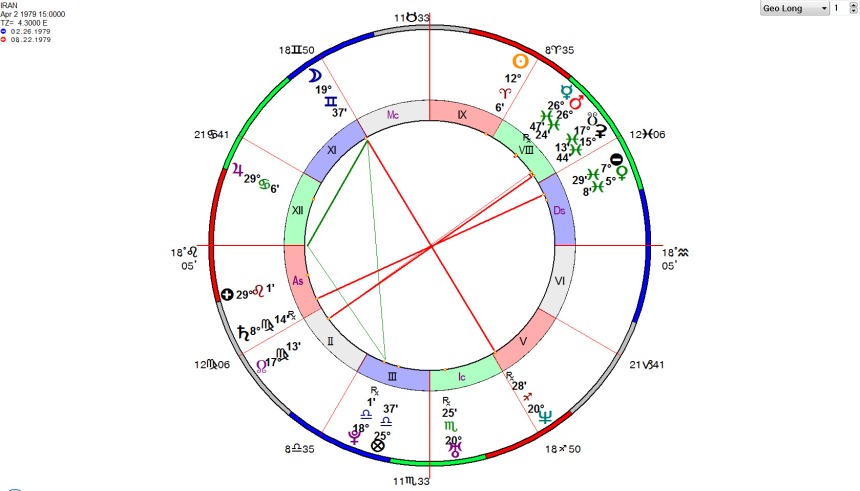 The Uranus-Pluto square alignment in mid-May of 2013 begins to activates Iran’s Sun – Pluto configuration. Therefore we can expect Iran’s nuclear ambition to remain intense throughout 2012 into 2013. Therefore the prospects of confrontation with Israel and the United States which seek to rein in Iran’s nuclear capacity is one that may spin out of control, if it is not quickly contained. In every confrontation, there is a point of no return, when another provocation, action or inflammatory comment proves in retrospect to have been the trigger that started a war. The Iranian leadership seems split between a radical, theocratic, ideological faction, led by the Ayatollah Khamenei, and a somewhat more moderate faction of secular government, led by the unpredictable President Ahmadinejad. Both factions want a nuclear bomb (Sun – Pluto) to prove that Iran is a great power, supreme in its region of the world, like the Persian Empire of old. 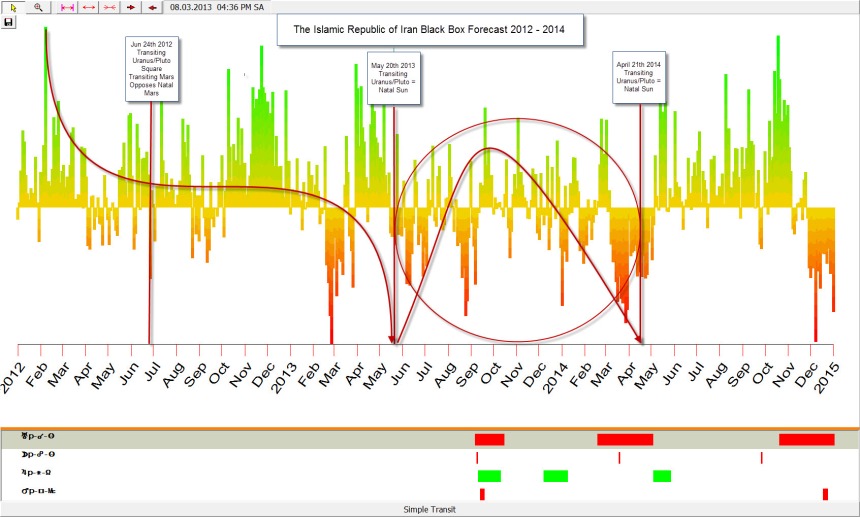 The first Uranus-Pluto square alignment on June 24th, 2012 is particularly significant when transiting Mars opposes Iran’s natal Mars, signifying when Iran might cross the technological point of no return of building a weaponized nuclear device. This transit will occur during the Mars Max cycle that began in October 2011 and will continue through July 2012. During a Mars Max cycle all things pertaining to Mars loom larger in the collective human psyche during this period; confrontation, litigation, heated debate, rash action, excessive heat, fire and explosions, danger, belligerence and conflict – both literally and figuratively. Therefore we can expect by mid-summer Iranian muscle-flexing in the Persian Gulf —military maneuvers as the backdrop for showing off new weapons systems, and Iranian Republican Guard telling the American Navy that they now have “new guidelines” for military action.

As of March 20th 2012, the beginning of the astrological New Year, there was 38% probability that the Israel will execute an overt Air Strike against Iran’s nuclear faculties and underground military assets according to Intrade (the world’s largest predictions market), before midnight ET 31 Dec 2012. Although military conflict is never rare, the prospect of a large-scale conflict in the Middle East will loom larger and larger in the news headline from mid-July of 2012 onward.

The Uranus-Pluto alignment will make a direct hit to the Iran’s Sun in May 2013. Iran will be under increasing pressure from within due to pervasive poverty and oppression of its middle-class, and from without from rising political instability in the Middle East military pressure from the United States and Israel, over the concessions on its nuclear program. The Islamic Republic managed to choke off its homegrown “Green Revolution” after the disputed June 2009 presidential election. But since 2011 it is being dragged into the uprisings sweeping across the Middle East and stirring massive unrest in Syria, and its unfriendly neighbor Bahrain.

Consequently there will be a fundamental reform in Iran’s system of government. However if there is no signs of political reform on the part of the government by spring of 2013, it is highly probable that Iran will undergo a Arab style revolt that will lead to widespread civil unrest. The bombardment of the Uranus-Pluto alignment to Iran’s Sun-Pluto configuration, along with other stressful transits will be more than enough to spark a conflagration with the ideological authoritarian rule, led by the Ayatollah Khamenei.

“It is an incredible resource of guidance and updated information on how to go forward.”
-A.D., GTA member

“For reliable and accurate reporting of future events, this is the site!”
-B.V., GTA member

“The excellent scope of work is worth sharing.”
-N.J.R., GTA member

“Not only is William an excellent astrologer, he gives practical, actionable advice. He exceeded my expectations by offering creative solutions to my business plan. He is a true business and personal consultant.”