Prediction: A Three Year Grexit Will Commence After “The Last Chance” EU Summit

Soon the wait will be over. Greece submitted a final compromise plan to the EU on Thursday, and the European finance ministers will meet now to discuss the proposal. This will be followed by an emergency summit for all 28 EU nations on Sunday to make a final decision on Greece’s future. The summit on Sunday is being billed as “the last chance” meeting by EU officials. Basically, Greece is being given just one more chance to embrace severe austerity measures that are being demanded of them by Germany and other creditor nations.

As we await the verdict on whether Greece will be in or out, here is a mundane horary on the speculative outcome:

“Will Greece Remain In The Eurozone After Sunday?”

Ruler of the 7th House Venus in the 10th Square Saturn –

Based on the overwhelming set of negative horary testimonies, Germany will reject the final Greek proposal making it likely no agreement will be made during the Eurogroup EU Summit. Therefore it is highly probably that the ECB will suspend Greece’s ELA agreement, making the prospects for a Grexit is almost certain. The failure to come to an agreement will escalate and intensify the ongoing deterioration of the Greek economy that set into motion an utter collapse of the Greek banking system. Since the Moon will go “Void-of-Course” after it makes its last aspect to malefic Saturn, it is not clear from the horary figure how the Grexit from the Euzozone will transpire, other than it will be a protracted and difficult process due to the high number of fixed signs in the horoscope. Also, in the horary figure the Moon will traverse about 3 degrees before ingressing into a new sign; therefore, I predict that after Sunday’s announcement, Greece will be conditionally quarantined by the Eurozone (and treated as a third-world country until 2018) and allowed to restructure its debt as plans to roll out the drachma are set in motion.

Here is the bigger problem that Europe now faces: Ultimately, Greek debt has to be forgiven by Germany, else Greece will not survive. That is a fact. The IMF wants to forgive debt but Germany is not prepared to forgive debt. Why? Because if they forgive Greece’s debt, that means that other indebted nations such as Spain, Italy, Portugal, Cyprus, Malta, etc., will have to write off large loans to Greece and they can’t afford to do that.

Also, if there was debt forgiveness, the European countries that have lent to Greece may not survive. Plus, Spain, Portugal, and Italy will want the same debt forgiveness for themselves else they will default.

Keep in mind what keeps the EU oligarchical elite and Angela Merkel awake at night is not the cries of despair from Greek pensioners, nor the penniless Cypriots, nor the hunger of starving and Portuguese, nor the politically explosive number of unemployed Spanish workers and impoverished Italian households — it’s the rise of the “Euroskeptic.” 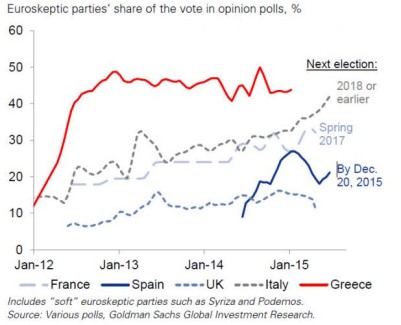 If that wasn’t enough, there are numerous secular indicators that significant economic trouble is ahead for Europe that will have a direct impact on the entire global economy. For instance, global commodity prices have be plunging as economists debate if a Grexit could trigger turmoil in financial markets. Also there is a massive problem brewing with the $100 trillion worldwide bond market. Why? Because according to the Bank for International Settlements – the Central Banks of Central Banks Worldwide, there is 26.45 trillion dollars in currency derivatives that are directly tied to the value of the Euro, and there is no longer any real liquidity in this market. So there is major concern that a Grexit could likely set off a “Ka-BOOM” event (aka a “Minsky Moment”), in the European bond market in the next few months ahead.

A “no deal” vote by the EU will surely plunge Greece, and the rest of the EU, into financial and political turmoil. For it is clear at this point no matter what happens with Greece, the truth is that we are rapidly moving toward another major worldwide financial crisis.