The Partial Solar Eclipse on August 11th at 18 Leo conjunct made a direct hit to the Turkish Neptune based on the Proclamation of the Turkish Republic horoscope (below, inner wheel). Twentieth Century astrologer Charles Jayne said that Neptune – when energized by an eclipse in a nations horoscope – was most frequently involved in the downfall of government because of a lack of clarity and direction in leadership, unsound fiscal policies resulting inflation of the currency, distorted markets fueled by bubbles, and inability to service or repay debt that could result in a chain reaction of defaults.

Inner Wheel – Horoscope for Turkey: October 29, 1923 at 08.30 PM EET (-02.00) in Ankara Turkey Source: “The proclamation of the republic took place in the National Assembly in Ankara at exactly 8:30 p.m., and it is for this that the horoscope for modern Turkey should be set.” Nicholas Campion, “The Book of World Horoscopes,” page 368.

During the lead-up to the August 11th Solar Eclipse, Turkey had been experiencing major instability in its currency with panic spreading throughout the global markets after the Turkish lira plummeted shortly after Trump Administration announced its plan to double tariffs on Turkey’s aluminum and steel imports. As of this writing (August 18, 2018), Turkey has a 15% inflation rate and a cratering currency due to the crisis.

The correlation of Turkey’s crisis with the recent Solar Eclipse augurs that the Turkish currency crisis could create a larger crisis than Greece.

Turkey boasts the 14th largest economy that has been funded by globally held debt because they’ve had easy access to global debt markets, borrowing a lot of money in U.S. dollars after the Federal Reserve initiated its zero-interest-rate policy, during the 2008 Financial Crisis. Turkey borrowed so much that its current foreign currency debt stands at more than 50%, meaning that most of its economic growth over the past 9 years was funded by DEBT creation. If that debt were issued in terms of Turkish Lira, there would be no crisis for it could be paid off with cheaper Lira. Unfortunately, roughly $450 billion of that debt was issued in terms of other fiat currencies, with USD-denominated bonds making up a full third of that debt!

European banks with exposure to Turkey along with U.S. banks connected to those European banks could encounter serious headwinds. If the lira continues to devalue, that external debt becomes impossible to repay, and if Turkey defaults on that debt, then foreign banks (Spain, France, Italy) are vulnerable to a liquidity crisis possibly resulting in a system banking crisis that can spread throughout the Eurozone. 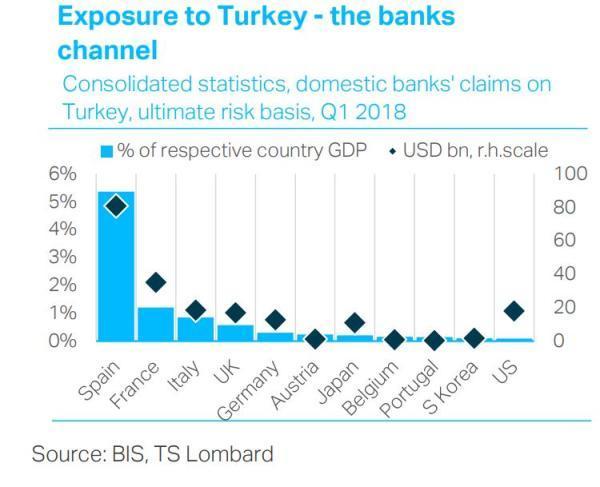 European bank stocks have just entered a bear market. As investors fear that a Turkey currency crisis will transition into a full-blown debt crisis, it is necessary to note that over $50 billion of Euro credit assets are tied into credit derivatives that are connected directly with Deutsche Bank (a universal global bank) that has been recently downgraded and considered insolvent. If Turkey were to default on its debt,, because the global financial system is incestually intertwined it could trigger a credit crisis among emerging markets throughout the globe that would likely invoke credit-default swaps that are tied directly to major world banks in Europe, resulting in a contagion that could threaten the entire global banking system. Now it’s serious. 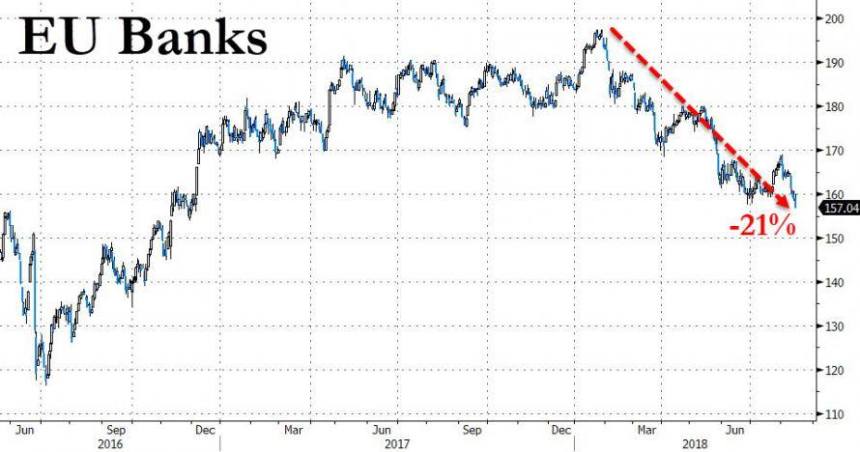 The eclipse hit to Turkey’s chart augurs the emergence of a severe debt crisis in the coming weeks ahead that will force Turkey to implement capital controls and request an IMF bailout, something President Erdogan will try everything in his power to prevent from happening as it would be a major political loss for him. Soon Turkey’s central bank will have no choice but to raise rates to defend its currency, placing the government and economy in a difficult position. Therefore, IMF and global banks along with Wall Street will be closely watching if the Turkish banks and major corporations – not to mention the government – will be able to maintain access to the foreign funding they need not only to keep economic activity moving along but being able to service mature debt when that becomes due in December. The alternative for Turkey would mean mass defaults for the companies that make up the core of the Turkish economy. 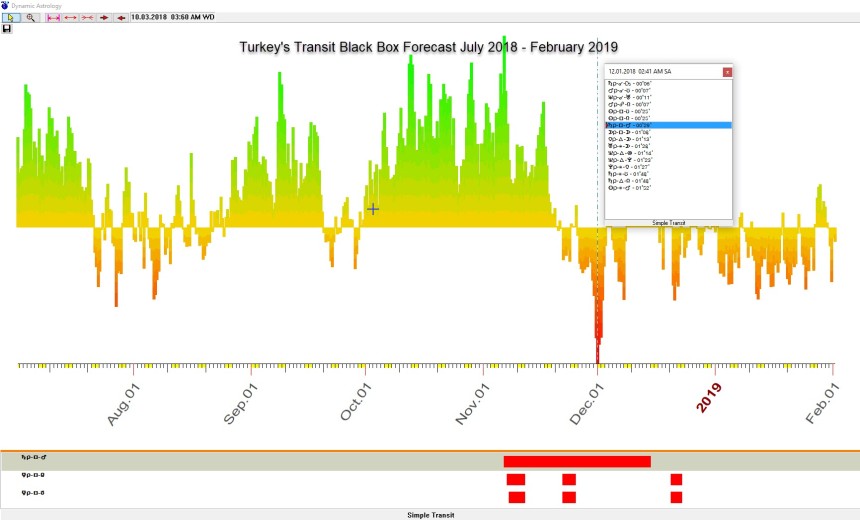 It is important to note that the problem is not just with Turkey, according to world-class financial forecaster Martin Armstrong who stated that after Italy’s warning that the European Central Bank has to keep Quantitative Easing going or else the entire bond market will collapse forcing Italy to exit the EU, resulting in a breakup of the Eurozone. This revelation has finally made investors realize that Mario Draghi of the European Central Bank has indeed destroyed the European economy and its bond market. Since earlier this summer, Armstrong has warned that we were entering the crisis phase, stating that many of our worst nightmares are coming alive and far too many people in government are still refusing to face reality.

Make Sense of the Global Chaos and Thrive

Make Sense of the Crypto Space Without the Hype