What is the probability that an Earthquake or other event will cause Unit 4 pool to drain at Fukushima? 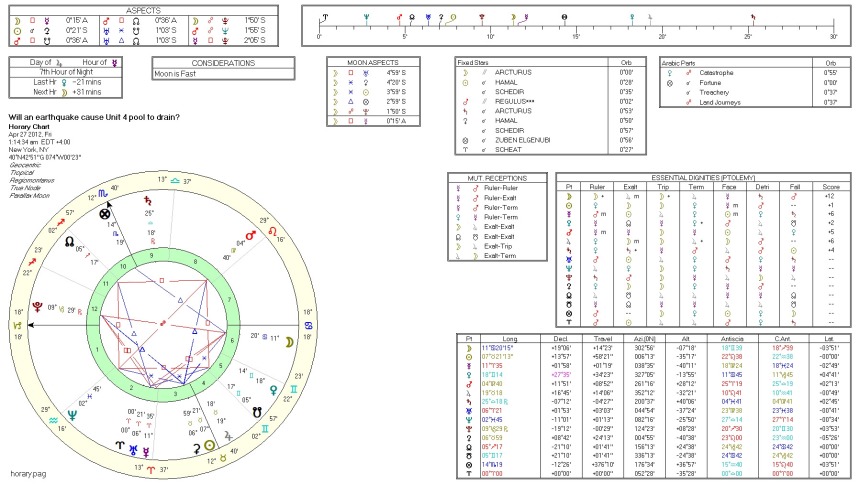 Saturn Rules the 1st House of the Question regarding the crippled building of reactor Unit 4 at Fukushima, with its 1,535 fuel rods in the spent fuel pool 100 feet above the ground.  Saturn, a natural malefic in horary, is weakly placed in the 9th House and retrograde a testimonies of a structurally damaged building that is exposed to the open elements, vulnerable to collapse.

The Sun Rules the 8th House rules the nuclear reactor itself and Unit No 4 spent fuel pool. The Sun peregrine – lacking composite dignity and  is also cadent being weakly placed in the 3rd House, indicating that the spent fuel pool above the reactor structure has been compromised with the prospect of running dry allowing radiation to go outside because there is no containment. However the Sun is in Taurus a moist and fertile sign and applies to Pluto (universal ruler or nuclear fuel) by trine, indicating that sufficient water is being applied, in spite of leakage, to the spent fuel pool to ensure that it doesn’t overheat.

Mars in the 8th House represents the 1,535 fuel rods of Uranium and MOX fuel rods. Mars is peregrine and applies to the Lunar Nodes, negative testimonies that show that rods are not protected by the containment vessel; and dangerously are open to the air. However Mars applies by Pluto by trine as well indicating that a catastrophic radiological fire for the moment is unlikely to erupt for the moment.

The Moon with is co-signficator of the question and rules the event that are to unfold in the future makes it last aspect by square to malefic Saturn, ruler of the 1st House. This is a testimony that the prevailing conditions at the Fukushima plant will break down with delays and setbacks in finding and implementing a solution to properly remove the spent fuel rod. Also malefic Uranus applies to Pluto (natural ruler of MOX nuclear fuel) indicating that the prospects of another earthquake or other natural event this year that could compromise the Unit 4 structure and cause the pool to drain resulting in a radiological fire.

Conclusion: Based on the horary testimonies above there is about 45% probability of a spent fuel pool collapse between May 1st and July 2013 that could expose the MOX fuel rods (one fuel rod contain 6% plutonium and has the potential to kill 2.89 billion people) resulting in a possible mass extinction event for Japan.