Greece Referendum Aftermath: “Greece Is Coming To Theater Near You” 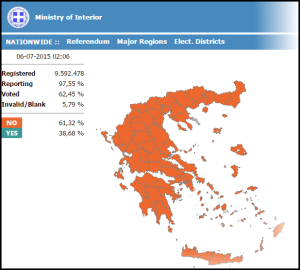 With all polling complete, the final result of the Greek Referendum vote is 61.3% No, 38.7% Yes – a major rejection of Troika hegemony which will likely be the final nail in any future “bail-out” negotiations between Greece and the Eurozone. The final vote tally of 100% ballots occurred on July 6th at 2:51 am ET, in Athens.

The most dominant astrological dynamics in the Greek Voter Referendum horoscope is the Sun/Mars opposition to Pluto, the Moon-Neptune conjunction, and the Venus-Jupiter conjunction.  The Sun/Mars – Pluto opposition  is symbolic of the brewing  power struggle and escalated into a full-blown skirmish between the Greek nation and the EU oligarchical elite.  The Sun- Pluto opposition fall along the Galactic Plane, which augurs that a global trend that is over: centralization and “too big to fail”,  a concept that asserts financial institutions are so large and so interconnected that their failure would be disastrous to the greater economic system, and they therefore must be supported by government when they face potential failure. 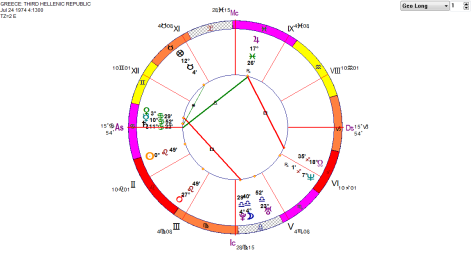 The onset of the Greek Euro crisis correlated with Saturn-Uranus opposition alignments in the Spring of 2010,that made several  successive hits to the Greek MC/IC axis, during which the first Greek bail request was made to the EU. Since the onset of the Uranus-Pluto square alignments from late 2012 to present, world affairs have become increasing complex, suffering from the malaise of excessive terminal complexity, as the crisis in the Eurozone accelerated and intensified, as Uranus-Pluto made successive hits to Greece’s Moon-Pluto, and Mercury-Venus -Saturn stellium.

The Blackbox graph below illustrates the intensity of stress from the Saturn-Uranus and Uranus-Pluto alignments to the Greece’s Third Hellenic Republic Horoscope  from 2010 – 2015:

From this backdrop, the Sun-Pluto signature in the Greek Voter Referendum horoscope indicates that much of this late-phase complexity that operates in service to the world’s TOO BIG TO FAIL banking system, which is mired massive market manipulation, secret arbitrages, and interest rate rigging, serves to empower of a sophisticated oligarchical elite that is embedded in the Eurozone supranational power structure.

Pluto rules the EU oligarchial elite and its Central Banking system. The applying Mars-Pluto opposition indicates that EU is in trouble not because of Greece, but because of forced supranational inter-dependency of Portugal, Ireland, Italy and Spain who have even bigger sovereign debt disasters then Greece, brewing on the near horizon. The EU by all rights should not exist, nor should any centralized supranational single currency system.

The Moon-Neptune conjunction in the event chart represents the delusion that despite their fledgling economy, they can continue living a 21st Century post-industrial age deluxe lifestyle, complete with comfortable and undemanding office jobs, early retirement, cheap groceries, affordable dining, long vacations, with 24/7 power and plenty of discretionary spending money to boot, like France and Germany.  The Moon-Neptune conjunction also augurs the dissolution of the populace to a more decentralized and more simpler, local way-of-life along, that will be demoralizing to the more hopeful citizens of the Greek nation.

The Venus-Jupiter conjunction is symbolic of the national pride (Venus ruling the Ascendant of the figure) of the  Greek people who exhibited great resolve in voting against the demands of the creditors on Sunday. The Venus-Jupiter in the horoscope is also symbolic testimony of Millennial youth vote that was the key demographic group in the outcome of the Greek Referendum, a generation that continues to live beyond their means and borrows from their future.

The Venus-Jupiter conjunction will be making success aspects to malefic Saturn in the coming weeks ahead,  indicating that as the Greek nation celebrates its defiant “No” Vote to the EU over the next few days, it will be quickly followed by a very sharp and severe recession as depositors diminish the dwindling cash reserves from the banks as the grocery store shelves empty out. After that, the future is very uncertain, and anything can happen. 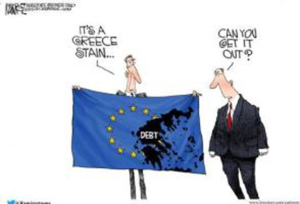 What many  don’t know is that the according to the Bank for International Settlements – the Central Banks of Central Banks Worldwide, $26.45 trillion in currency derivatives are directly tied to the value of the Euro. Now that Greece has defaulted and the prospects of a Greek exit is now a real possibility, the euro is going to fall off a cliff. And if that happens big financial institutions and banks in Europe and the United States and Japan will begin to fail, and in the process plunge the entire planet into another major financial crisis.

BiWheel of the BIS and Final Uranus-Pluto Square

This chart by RBS Economics shows the largest falls in real gross domestic product in currently advanced economies since 1870. Greece’s GDP collapse was included in this selective group.

Many are extremely skeptical that Greece will leave the Eurozone or that the Global Banking System is vulnerable to a deflationary debt implosion because CNN, BBC, and even FOX NEWS, tell you otherwise. However, former Federal Reserve chairman Alan Greenspan (a member of America’s Advance Oligarchy and Wall Street elite) is saying:

“I believe [Greece] will eventually leave. I don’t think it helps them or the rest of the Eurozone – it is just a matter of time before everyone recognizes that parting is the best strategy. The problem is that there there is no way that I can conceive of the euro of continuing, unless and until all of the members of Eurozone become politically integrated – actually even just fiscally integrated won’t do it.”

The result of yesterday’s Greek Referendum “No” Vote, means again that there is now a very real possibility that Greece could leave the Eurozone in just a matter of months, and the elite know this. Greek Prime Minister Alexis Tsipras is promising that Greece will be able to stay in the euro, but without more money from the EU and the IMF, the Greek government will not be able to pay its bills and virtually all Greek banks will inevitably collapse.

The the mundane astrological portents and the Uranus-Pluto square alignments that  have been archetypally operative from 2012 to present augurs for drastic shifts in Greece’s financial position. Therefore, we can expect powerful shocks to occur the system resulting in drastic changes in financial positions, along will titanic geopolitical power plays, accelerating market volatility, major market corrections, bank panics, and often unexpected and sudden large-scale economic failure. Also during this period we can expect excessive rationalization by the mainstream financial news media, and unprecedented proclamations by governments, to prevent the loss of credibility with the general populace, as unexpected “volcanic shocks” to the global system continue to intensify.

Blackbox Forecast of the World’s Banks:

What is about to play out with Greece in the coming days and weeks ahead is just a model of the catastrophe that is about to engulf the world. The rest of Europe is about to experience a tremendous amount of pain as financial markets unravel due to the results of this referendum. For a “Grexit” could set off a chain of events could invoke sovereign debt implosions throughout the globe as there are nearly $60 trillion of derivatives that are directly connected to the European bond yields, European interest rates.

Portugal, Spain, and Italy all collapsing…

The probability of contagion is very high now then it has ever been, expect defaults to occur in the coming months ahead that will cause bond yields to soar over Europe and possibly cause tremendous chaos in the global derivatives markets.